What kinds of reproductive diseases occur in ferrets? 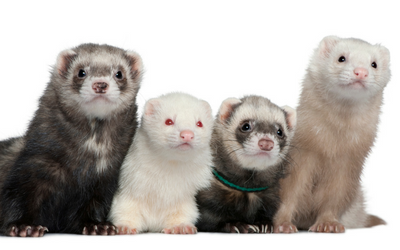 "An unsprayed female which is not bred suffers the effects of a persistently high blood level of estrogen."

Reproductive disease in ferrets is rare today, as most pet ferrets are spayed or neutered at a young age. One disease that is still occasionally seen in pet ferrets occurs in females that are not spayed. An unspayed (intact) female ferret that is not mated (bred), or fails to ovulate can suffer the effects of a persistently high blood level of estrogen (called hyperestrogenemia or hyperestrogenism).

Why does this happen?

Like cats, ferrets are what are known as induced ovulators; that is, the act of breeding stimulates the ovaries to release eggs. If the ferret does not ovulate, she will continue to produce estrogen. Unlike cats, the ferret is susceptible to secondary effects from the high levels of estrogen that circulate in the bloodstream just before estrus (heat).

What signs should I look for?

The main effect of chronically high levels of estrogen is suppression of the production of blood cells by the bone marrow. The bone marrow produces the whole spectrum of circulating blood cells; thus, over time, the ferret may become deficient in red blood cells, white blood cells, and/or platelets.

A decreased production of red blood cells in the bone marrow will eventually result in a deficiency of red blood cells in the circulation, or anemia. One of the most obvious signs of anemia is pale gums, or loss of the normal pink color of the mucous membranes. Since red blood cells carry oxygen from the lungs to the rest of the body, anemic ferrets will often be listless and may breathe quickly due to the effect of lack of oxygen in the tissues of the body. Because the anemia develops gradually, the ferret’s body is able to compensate, and the signs of disease are subtle until late in the condition, when the ferret can no longer hide its signs.

Bone marrow suppression also decreases the number of circulating platelets, which are an important factor in control of bleeding. In a normal animal when blood vessels are damaged or broken, platelets will clump together to seal the leak and stop the hemorrhage. In a ferret with decreased platelets due to high levels of estrogen, an increased tendency to bruise or bleed occurs. This can be seen most easily in the gums, but may occur in any mucous membranes. Uncontrolled hemorrhage may also occur in the gastrointestinal tract or other internal organs. Hemorrhage is a common cause of death in these hyperestrogenic ferrets.

"Hemorrhage is a common cause of death in these hyperestrogenic ferrets."

In chronically affected animals, infections can occur because of a reduction in white blood cells and suppression of the immune system.

Before any life-threatening blood disorders occur, the signs of persistent estrus are obvious - a swollen vulva and possibly some vulvar discharge. Later on in the condition, depression and reduction in appetite signal the beginning of more serious problems. At this point, a careful examination will reveal pale gums and perhaps some small hemorrhages (called petechia) on the gums.

The tests required to confirm a diagnosis of hyperestrogenism include a CBC (complete blood count), in which the numbers and appearance of red and white cells and platelets will be assessed. Although persistent vulvar swelling in a female ferret is usually diagnostic of the condition, blood tests are required to determine the severity of the condition and to predict a prognosis or long-term outlook. In some cases, blood tests may also lead to a different diagnosis.

What other signs of hyperestrogenism are there?

Another sign of chronic hyperestrogenism is hair loss beginning at the tail and progressing forward along the flanks on both sides of the body. A tumor of the adrenal gland can also cause the same pattern of hair loss, although with adrenal gland disease the animal does not usually have anemia until very late in the disease.

How is hyperestrogenism treated?

“The most obvious way of doing this is to spay or perform an ovariohysterectomy.”

The treatment for hyperestrogenism is to stop estrus. The most obvious way of doing this is to spay or perform an ovariohysterectomy (surgically remove the ovaries and uterus). Before this surgery, it is essential to perform blood tests. A ferret with dangerously low levels of red blood cells and platelets is not a good candidate for surgery and may require blood transfusions before surgery can be performed.

In such cases, medical management is the best option initially, until the ferret becomes stable enough to handle surgery. Hormonal treatment with leuprolide acetate (Lupron) a drug that inhibits further ovulation is effective in the vast majority of cases. Another option is the placement of a Deslorelin implant – a small microchip-like implant that goes under the skin and slowly releases hormones that suppress estrus.

In cases where anemia is very severe, blood transfusions will be needed. If the packed cell volume (PCV), or percentage of red blood cells compared to total blood volume, falls below 15%, a transfusion is generally required. Ferrets do not have any identifiable blood types. Blood from any ferret can be given to a ferret that needs a blood transfusion. An adult ferret can safely donate between 5 and 10 mL of blood, which can immediately be transfused into the anemic animal.

A ferret in this debilitated state will also require nutritional and fluid supportive care in hospital.

What other diseases of the reproductive system occur in ferrets?

"In male ferrets, tumors of the testes have been reported; castration is the required treatment."

Other diseases of the reproductive system are much rarer than persistent estrus, but are clearly of paramount importance to the owner of an affected ferret. Pyometra, or infection of the uterus, is very uncommon in ferrets, as most female ferrets are spayed very early in life, before they are sold. Pyometra is treated by removal of the uterus and ovaries (ovariohysterectomy). Similarly, tumors of the ovary also are rare.

In male ferrets, tumors of the testes have been reported; castration is the required treatment. Enlargement of the prostate can also occur in older male ferrets; prostatic enlargement, commonly associated with adrenal gland tumors in ferrets, causes problems with urination. Difficulty with urination may be caused by an enlarged prostate compressing the urethra (the tube draining the bladder) or by a urolith or bladder stone. Prostatic enlargement is commonly a consequence of an adrenal tumor, and thus full diagnostic testing for such tumors when male ferrets are having difficulty urinating is essential. If caused by an adrenal tumor, prostatic enlargement reduces very rapidly after removal of the tumor or after injections of leuprolide acetate or placement of a Deslorelin implant. For more in-depth information on the management of adrenal gland diseases in ferrets, see handout "Hormonal Diseases in Ferrets".

© Copyright 2017 LifeLearn Inc. Used and/or modified with permission under license.

We are still here for you and your pets! Find out how we have changed standard operating procedures to keep everyone safe!